As you know, my first half marathon (ever) was supposed to be the Milton Keynes Winter Half back in December.

Unfortunately the race was postponed due to a heavy snow forecast. I was gutted, but upon seeing the weather the next day, I realised it was a good call to make. I don’t live too far out from Milton Keynes and it was a fair few inches thick.

So I decided I’d have to run a different half marathon in January. Which also got cancelled. Lucky me!

In the end I ran my first half marathon at home, by myself, in 2:37. Despite a disappointing last few miles, I was pretty thrilled with that. I ran another one with a friend which was worse (2:51) and ended with the start of my foot problems.

And then we came to the MK Winter Half: my first race, as it was meant to be all along.

I was by myself for this race, with no family or friends out there to support me. I knew it’d feel a little bit lonely as a result.

I arrived at about 9am (an hour before the start) and wandered around helplessly for a bit – I’m not the social butterfly I convince myself I am sometimes!

At that point, the baggage queue was non-existent, so I got in there quick and kept walking around to keep warm. It was pretty foggy and looked like it was going to be a bit of a rainy run.

Upon discovery that there was a 2:30 pacer, I decided I’d go for it. My 2:37 was let down by a fair amount of walking in the final three miles, so I figured I could get closer to 2:30 without too much of a struggle.

By the time the race started (late, due to the baggage and toilet queues taking a long time to clear), I was anxious to just get going.

Once we were off, I realised that keeping the pacers in my sight was going to be more challenging than I’d hoped. The paths were quite narrow and it forced us to go a bit slower than we’d have liked.

So I quite quickly lost them and resigned to just running on my own. Without headphones allowed, it was going to be a little tough, but at this point I was still in a crowd with a lot of other people.

I was surprised to see a fair few people walking around me, even less than a mile into the race. I used it as a motivation to keep going: if I was going to walk, I’d have to run at least three miles first (the 5k run, 1k walk routine).

In actuality, everything felt sore and I started walking at about 3.5km. There’s something about this distance in a race that always seems to get me, which was especially weird because I was running at a fairly mellow pace.

I wasn’t going to give in to it though, and I picked up again by the time I’d hit 4km. I didn’t walk again until just short of 10km and I was pretty happy with my pace and time at that stage, coming into the 6 mile chip timer at 1:12.03. I could still probably beat my 2:37 (just) if I kept up the pace. 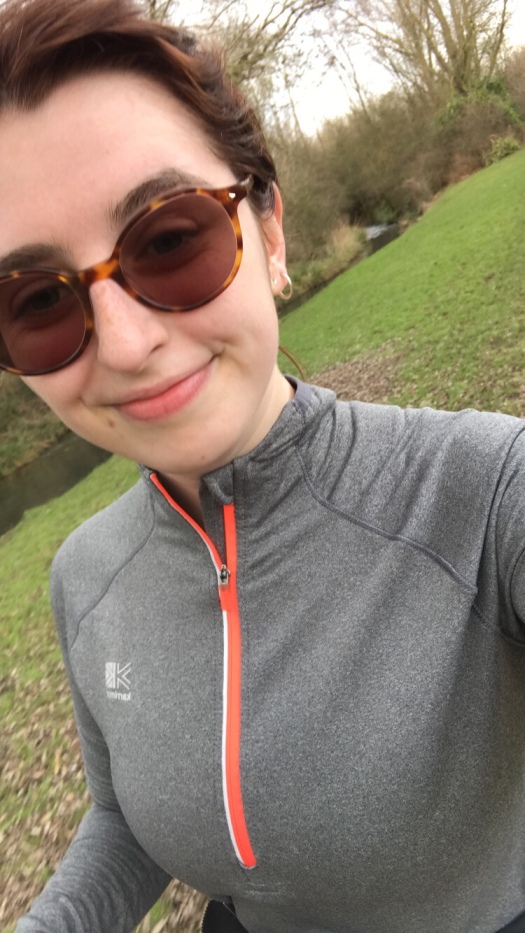 The next 3 miles, however, disagreed with me. My hip was giving me a lot of grief, forcing me to walk more than I wanted to. All the people I had proudly crept by during the first half were now proudly creeping by me instead. I dug my heels in (metaphorically) and carried on to the best of my abilities.

By this point I was a) virtually on my own, b) scorching from the sun, which had somehow made its way through the foggy morning, and c) struggling up a long stretch of incline. I was thirsty and tired, but I knew the water station at mile 9 would give me the energy boost I needed.

Or so I thought. As I approached, I realised they had run out of water. I confirmed with one of the guys handing out sweets and felt utterly hopeless. I asked a group of ladies at the side of the station if they had any, but they didn’t.

I really felt like giving up at that point. 4 miles to go, no water and I was emotionally exhausted. I started to cry (as you do) which then further restricted my ability to run. You can imagine I looked pretty good right about then – and totally different to myself just 3km before then.

Amazingly, one of the ladies found a water bottle in her bag and ran up to give it to me. I don’t know who she was, but she was my hero!

I was really lonely and just wanted a familiar face or someone to encourage me to keep running, but neither of these things came. I spent the next mile or so struggling to motivate myself. The lack of water had really knocked me back, even though I’d ended up with some water… I can’t explain it!

Thankfully, the next water station (at 11 miles) hadn’t run out. Only 2 miles to go, I told myself, but I could barely motivate myself to run – and when I did, my hip was shooting with pain.

Eventually, I reached the stage where people were walking back to their cars, having finished. They started cheering and saying that it was just around the corner (longest corner of my life!) and after a while I could finally see it for myself. I struggled across the line and the clock read 3:00:26, which was disappointing. I knew I’d be coming in with a time that I wouldn’t be proud of, but I’d hoped to run sub-3 hours at the very least. 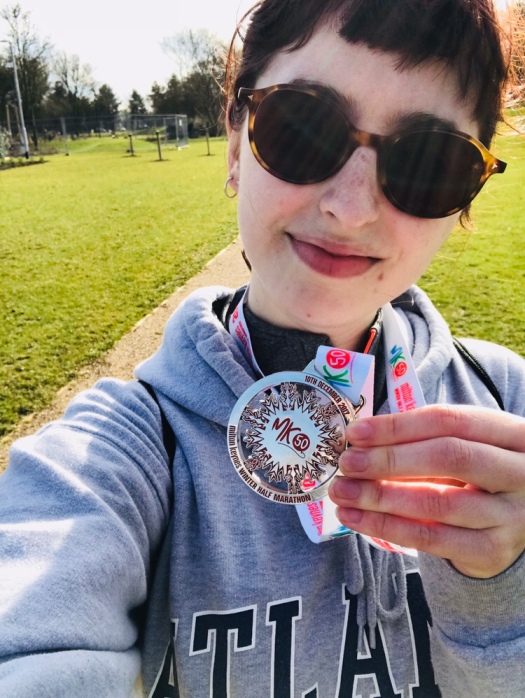 Luckily, it had taken such a long time to get across the start line in the first place, that my actual chip time was 2:57:24. As I said, I’m not especially proud of this time – I know I’m capable of 20 minutes better! – but I was so, so relieved that it was over.

A friend of mine was due to run the race with me, but deferred her entry to December, so I’d already signed up to the next one to run with her. While I had a few small gripes with the course and organisation, I am looking forward to returning and smashing my time there.